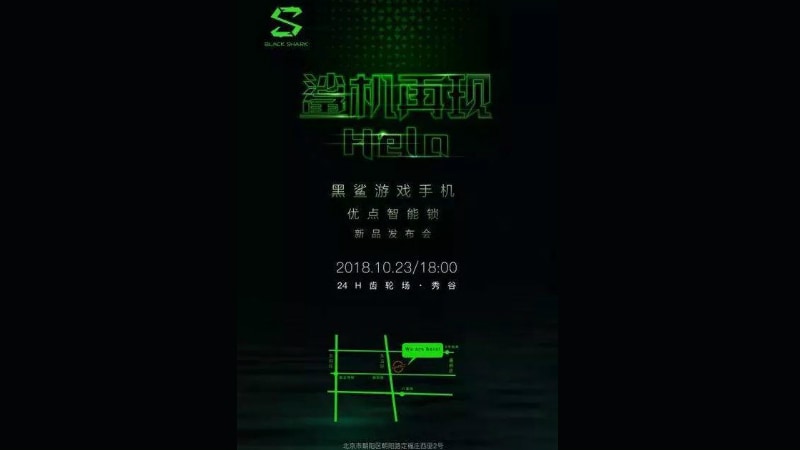 Xiaomi launched the Black Shark gaming smartphone earlier this year to take on rivals like the Razer Phone. The phone was launched in China only, and details on international availability were scarce up until this month. Recently, the global website for the Xiaomi Shark variants went live indicating of an imminent launch. Now, Black Shark 2 has been spotted on GeekBench as well. Separately, a sketchy leaked poster also tips the launch date of the new Black Shark phone.

Lending more credibility to an impending launch, the Black Shark 2 variant was also spotted on GeekBench. The phone is listed with model number AWM-A0 and its single core score was 2403, while its multi core score is listed to be at 8389. The device is listed to run on Android 8.1 Oreo, be powered by the Snapdragon 845 processor and pack 8GB of RAM.

The new global Black Shark website displays words such a ‘Sharks Approaching’ and ‘Unleashing Soon’, but doesn’t provide any other details apart from that. The recent TENAA listing revealed that the upcoming Black Shark device sports a 5.99-inch full-HD+ display, a 4,000mAh battery, a Qualcomm Snapdragon 845 SoC, coupled with Adreno 630 GPU and up to 8GB of RAM. The smartphone could also have a dedicated liquid cooling technology to offer out-of-the-box thermal management for an enhanced gaming experience. There have been no leaks on the pricing of the upcoming Black Shark device, but to recall, the first Black Shark phone was priced starting at CNY 2,999 (roughly Rs. 31,100) and it went up to CNY 3,499 (roughly Rs. 36,300).